Time keeps running, and world keeps turning, whereas I didn’t have time to update my story on my blog.

It’s so bullshit if people say that they didn’t have time to do what they wanna do.

Especially a man who study in business where business people should keep able to manage time properly.

But then, we have to go on. it’s just my opening sentences of my story but we can learn from that sentence namely about philosphy lesson that can be captured from this event is we can’t regret past time.

Oke guys This time, I want to share my solo trip was in Barcelona. I did solo trip but I actually didn’t feel alone in my journey there. There I brought my little friend who is a canon (camera).

He accompanied me to around that town. so I absolutely felt enjoy with my solo trip.

I was spending a budget approximetely 200 € there for just a week but honestly I got so much more than what I spent there beforehand.

And one night, I slept under the blue sky trying to feel how a homeless can live along their life without home.

And it was not so complicated because every building can be visited freely and without doubt to go to clean toilet. 🙂

In Barcelona I didn’t use public transportations because in my philosophy it wouldn’t be so interesting with easy way to go somewhere. Walking around the city with our owned foot We can get more experiences.

Maybe people get fear if they have lost their way.

but for me, it can be a super exciting where we are as a human being should find the right way from many wrong way. and it perhaps can be a manner to contact with social to learn about the people.

and it can be a lesson to understand people with different language and with limited understanding each other. but it’s so fun. 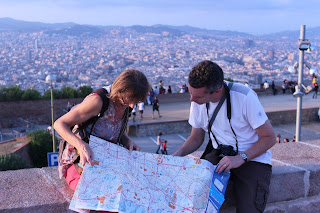 I also usually bring a city map and try through different way to capture a best spot.

because that I believe in every place has its beauty side.

And my friend canon helped me to saved every moments that I visited. 🙂

the most positive thing of  when I was walking with my foot around its Barcelona town was I have been successfuly to bring my weight from 73 kg to 69 kg because of walking about 30 km a day.

I was being a vegetarian there. eating fruits and vegetables almost everyday were being my entirely daily foods in Barcelona and being healthy absolutely. 🙂 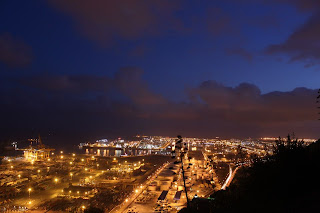 Barcelona in my point of view was so incridible and magnificant city.

Every city corners had a special design architecture.

and I can garantie you that all of those beauty just can be felt when you use your foot to go around that town., Barcelona also has many special place to be enjoyed.

I was also thinking if I have a wife, I will place our honeymoon in Barcelona. 🙂

Not only Indonesia has beautifull beach, but also Barcelona has it too. Barcelona has Montjuic mountain where there is a big castil above there. 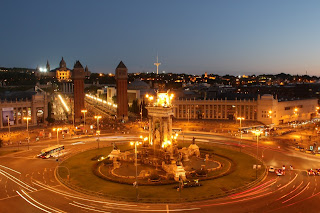 From there We can take best picture from Barcelona city. .

and If we gonna go to the Barcelona downtown at the night.

we still can get feeling the 24 hours atmosphere of the city where live always though the night comes and the sun rise. The city has so romantic atmosphere because of providing 24 hours cafe alongside its street..

One of some stories being my bad experience in Barcelona I got, when I was asked by local police without uniform to open my bag and all of my stuff including my sweet pocket. They tried to check inside my bag. but I didn’t let them to do it. they supposed me that I was a punk kid who sell narcotics in Barcelona.

But I don’t trust them because both of them didn’t look like a police. I saw one of them did pee at random place, because of that I didn’t trust them. As it was, I was thinking to run away from them. but they kept catch my bag. so I couldn’t run at that moment. then I tried to trust them as a police. I said I am a tourist from Germany and finally I let them to check my pocket. after checking my pocket they didn’t find anything what they were looking for. but then they explained me that here is usually used as a place for the narcotics transaction by the gangster. Without longer thinking I left that place as soon as possible in order to go away from another problems in that area.

One of my funny story in that beautiful country was when before I wanted to go to outside the Barcelona airport. I was still wearing 3 T-Shirts with 4 sweaters. so it means I weared 7 layers of stuffs on my body. and it was so hot honestly I felt. All those I did with a reason to reducing weight of my bag in order that can be entered into its airoplane bag cabin. Flying with Ryanair we’re just permited to bring our bag in weight about 10 kg. because of that reason, I had to use my mind to deceive the flight attendants.

then, I thought that Barcelona seems like a Germany where it might be cold as the night come.

but, After I arrived and went to outside its airport, I felt so hot. and then I was looking for a toilet to take some of my clothes down and then to put into the small bag that I prepared beforehand. Going ouside I had felt the themperature about 29 degree of celcius.

Yeah finally I found sommer and sun sine in europe continental after my experience in Germany where sommer is in frequently founded in this year. This funny story haven’t ended yet.

After finishing my holiday for 5 nights in Barcelona, then I came back to Germany but I weared a minim clothes from Barcelona. I have forgotten that Germany is cold right now.

I was wearing a shorts. and After I arrived in Germany, and then I left the aeroplane, I was welcomed with 15 degree of celcius. So freaking cold outside I felt. . 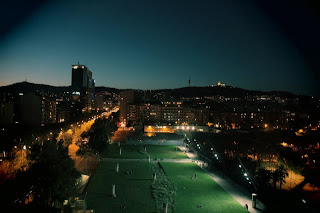 More things I got from Barcelona that have already been teaching me an important life lesson :

because In University I just learn more theories but to applying its teories is absolutely outside your lectures.

for example : when I was staying at hostel. there I was learning about communication, social networking.

because I was meeting and cooking together with backpacker from around the world.

and  when I was buying some foods and managing time to my whole holiday, I was learning about controlling, and project management. Even more awesome things are just gotten in my holiday or outside my study.

For ending this story I just wanna tell that checking the local temperature before you wanna go elsewhere is very recommended and necessary too.

So, It’s my story thanks for reading.