The budgeting process is a crucial component of management control systems (Accaglobal, 2017). Furthermore, Drury (2001: 283-284) added that budgets covers some purposes such as planning annual operations, coordinating the activities of the various parts of the organization, communicating plans to the various responsibility center managers, motivating managers to strive to achieve the organizational goals, controlling activities and evaluating the performance of managers.

To support Alderley Ltd for building their budgets because their accountant has suddenly resigned, I am assigned to provide the functional budgets for the forthcoming financial quarter which is different compared to the traditional incremental budgeting that the previous company accountant has historically used.

According to McKinney and Howard (1998: 365), traditional incremental budgeting is a budgeting approach that permits policy to continue indefinitely without scrutiny, which means the past becomes the present and future becomes the projection of the present, and it tells how much company spends and what it buys but not why. Further explanation was continued by Aicher, Paule-Koba and Newland (2016: 72) that incremental budgeting has benefits, for examples:

Nevertheless, they also added that this approach has also disadvantages, as follows:

While functional budgets represent quantitative and/or financial statements which are prepared prior by each functional area of the business to begin of a trading or operating period and they are applied to arrange the company’s objectives, activities as well as policies for the entire business (Bendrey, Hussey and West, 2003: 68).

Generally speaking, budgets are prepared for a specified time period. It can be a year, quarters, months or in some cases, weeks. Bendrey, Hussey and West (2003: 68) argued that the longer the period taken for planning purposes, the greater the difficulty in forecasting future performance. In this assignment, I am tasked to prepare functional budgets for the forthcoming financial quarter, January to March, see table 1 below. 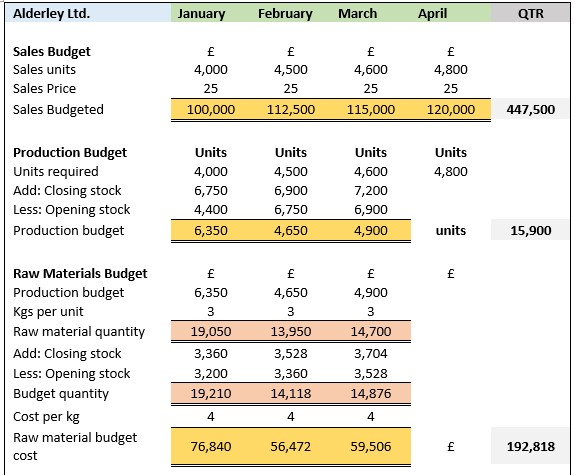 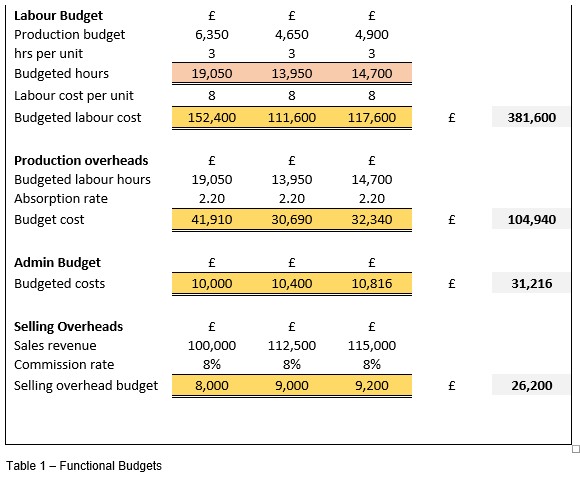 To assess whether or not estimated investment of company would be generating benefits for forthcoming quarter, we are able to compute its Return on Investment (ROI) from January till March. ROI can be generated by dividing company’s profit from sales with company’s investment which is assets. In our case, our assets included the total 3-months budget for Raw Materials (£192,818), Labour (£381,600), Production Overheads (£104,940), Administration (£31,216) and Selling Overheads (£26,200). While our estimated revenue from sales from January till March is £327,500.

As a result, the ROI of this company would be about 45% so that it can be concluded that a positive percentage of ROI would be generating profits for this company. According to George and Franklin (1996: 5-6), ROI is a method to assess how well (or poorly) management performs and used by creditors and owners to assess the company’s ability to earn an adequate rate of return. Furthermore, managing directors can compare the ROI of this company to other companies/industries, because ROI provides financial information about a company’s financial health.

All these above described functional budgets had been through important stages in the budgeting process according to Drury (2001: 287-290), as follows:

Drury (2001: 291) also added that the budgetary process should be dynamic and continuous. In other words, it does not end for the current year once the budget has been generated.

From above description about budgeting process, we can also find some benefits, as follows:

In spite of several benefits, budget preparation process could be giving some disadvantages, for examples:

According to Daum (2005), Nowadays, in the highly dynamic environment for companies, the concept of fixed budgets should be changed with the concept of Beyond Budgeting Management Model in order to become effective in a global economy with rapidly shifting market conditions and fast and nimble competitors because companies must be able to adapt constantly their priorities and have to aim their resources where they are able to bring most value for customers and shareholders. Moreover, Daum (2001) argued that an increase of complexity of company activities and internal dynamics occur so that the task of today’s companies is not only to produce and sell products, but also companies have to compete in a seller’ market and buyer’s market. In other words, they must keep bringing new products, keep doing very different things at the same thing with developing the right products (in the long-term), keep having good relationships with customers, employees, and business partners (medium-term), and keep operating their business profitably (short-term).

As we have known, the traditional incremental budgeting which does not cover all those aspects seems like inflexible and focusing only in company’s profit without seeing other aspects. Daum (2005) mentioned that Beyond Budgeting represents a management model that wants to overcome the restrictions of the traditional budget and aims to increase the adaptability of companies. Furthermore, Charifzadeh and Taschner (2017: 151) added that Beyond Budgeting is also a concept which postulates the complete elimination of traditional budgets, and instead recommends a flexible system of planning and control based on employee empowerment and market-like coordination.

Beyond Budgeting has several characteristics according to Kaplan Financial Knowledge Bank (2012), as follows:

According to bbrt.org (2016), a key element of Beyond Budgeting is alignment between leadership principles and management processes, as seen in figure 1 below, which is also explaining about the 12 beyond budgeting principles. 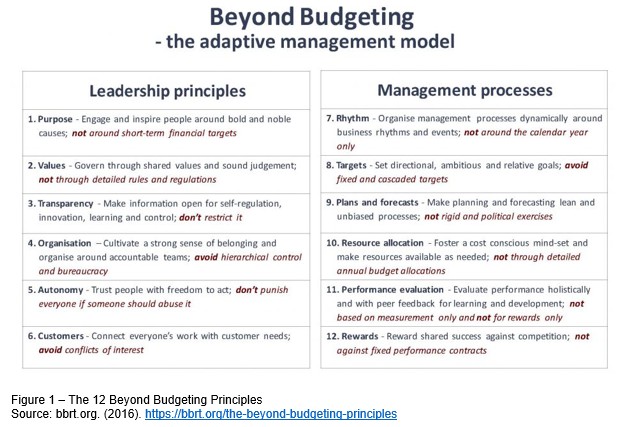 Kaplan Financial Knowledge Bank (2012) found some advantages of the beyond budgeting model, as follows:

Nevertheless, companies which applied beyond budgeting should consider its consequence that a cohesion between leadership principles and management processes should be in harmony in order to avoid risk of having disconnects between what is said and what is done, which is able to be poison to any organization (bbrt.org, 2016).

To conclude this this essay, I would like to suggest John to consider the beyond budgeting approach which would be more appropriate and complete in the current turbulent economic environment where market conditions are rapidly shifting, and an emergence of nimble competitors is forcing his company to adapt constantly what customers and shareholders need. Beyond Budgeting offers what traditional incremental budgeting does not have and it refers to the concept of balanced scorecards which covers 4 perspectives (financial, customer, internal business process and employees). In other words, Beyond Budgeting is concentrated not only in producing and selling products, but also it concerns other perspectives (e.g.: customers, employees, business partners and shareholders) so that it would increase the adaptability of his company in the future.

Charifzadeh, M. and Taschner, A. (2017). Management Accounting and Control: Tools and Concepts in a Central European Context. Weinheim: Wiley-VCH.

Daum, J. H. (2001). Beyond Budgeting: A Model for Performance Management and Controlling in the 21st Century? [Online] Available: http://www.juergendaum.de/articles/beyond_budgeting.en.pdf  [Accessed: 25.10.2017].